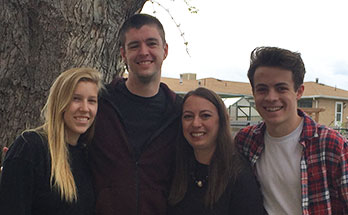 In April 2018, three DU undergraduate students were recognized as top-three national finalists in the widely-popular science communication contest The Flame ChallengeTM, held annually by the Alan Alda Center for Communicating Science. Dylan Appleby, Isaiah Jakab and Piers McCarthy created a four-minute video aimed to teach a hypothetical eleven-year-old student the answer to “what is climate?”

When the video team entry was chosen as a finalist, the team had to name Barter as the official contest entrant due to submission rules that the entry must come from a “scientist.” This maneuver gained them national recognition and the possibility of a trip to New York to receive the award from well-known public figure Alan Alda.

They did not win in the end, but their video lives on. View their entry below.