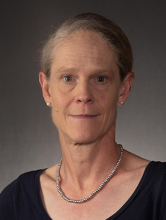 Dr. Rebecca Powell is this year’s recipient of the College of Natural Sciences and Mathematics Excellence in Teaching Award. This award recognizes the single top instructor for the year from nearly 100 faculty in the College. Becky teaches several courses in geographic information science (GISc), ranging from introductory remote sensing to advanced courses in remote sensing and applications of LiDAR. These courses are technology heavy and require continuous revision to keep abreast of software updates. The courses are challenging for students and include a significant experiential learning component such as labs and research projects. Students appreciate her depth of knowledge, the organized way in which she presents her courses, and find her to be a helpful and effective instructor.

Becky developed a geospatial technology project course as part of her ongoing work with DU’s Center for Community Engagement to advance Scholarship and Learning (CCESL), where student teams work on a technology project to support the community. She designed a novel approach to provide students an experience similar to what they will encounter in the workforce. Undergraduates register for the course GEOG 3170 Geospatial Analysis Project and graduate students register for GEOG 4170 Geospatial Analysis and Project Management. The undergraduate students comprise the project team, and the graduate students assume the role of project managers, each assigned to a team of undergraduate students. Examples of this year’s projects include the development of a web interface to display campus building energy usage statistics, a mobile app to compile and display information about the DU arboretum; a database and series of maps depicting current and future transportation modality options for the DU campus, and a digital dashboard depicting DU solar energy collection and utilization statistics.

In addition to offering formal coursework, Becky routinely supervises several advanced undergraduate and graduate student independent study projects. She directs several MS(GISc) capstone projects, is the curriculum coordinator for the on-campus MS(GISc) program and led the development of the newly approved BS(GISc) major. She is a senior GISc faculty member in the department, and the success of our undergraduate and graduate programs in GISc are in no small measure due to Becky’s dedication to her students.

This year's Field Quarter was like none other in the history of the program as the University's COVID-19 protocols significantly impacted the normal routine. Gone this year were hauling gear, camping for extended stays at field sites, communal cooking, camaraderie around the campfire, and lengthy road trips - replaced by daily temperature checks, day trips, box lunches, and a 48 passenger bus to accommodate the group. Even with the limitation on travel, faculty Don Sullivan, Mike Kerwin, and Matthew Taylor and the students were able to spend quality time in the field, with trips to Mt Evans, the Colorado Front Range, the eastern Plains, and the DU neighborhood to collect data and conduct research projects.

Over 30 years ago, four years before I joined the faculty and staff in the Department of Geography at the University of Denver, I traveled by plane, train and automobile to Aspen, Colorado on several occasions while employed by Denver-based GIS/AM/FM consulting firm, UGC Consulting. The City of Aspen in Pitkin County was one of our more popular clients. Who wouldn’t want to travel to Aspen for a half-day of meetings and a half-day of skiing. Life was good! The work consisted of developing a GIS feasibility study including strategic implementation plan and cost-benefit analysis to plan and justify a municipal GIS program that was to be housed within the Information Technology Department. Phase II of the Aspen contract came later with hardware and GIS software acquisition, data conversion, and quality control. Thirty years later the GIS program in the City of Aspen is alive and well and the incredibly amazing fact is that the GIS professional staff of three now housed in Engineering are ALL DU Department of Geography & the Environment graduates. I was fortunate to get an hour of time for a Zoom call with Bridgette Kelly, Joshua Zeeb, and Erin Glen to talk about their time at DU and their GIS times in Aspen.

Bridgette Kelly graduated with her MSGISc degree in 2002 having come from Colorado State University having joined us with a degree in Wildlife Biology. She recognized then that GIS skills would be an important skillset to meet her career goals. Bridgette was on campus when all the graduate students were on campus and the community was tight-knit and close. She remembers spending long hours in the GIS lab collaborating with her colleagues because students didn’t carry laptops in those days. All that homework had to be done in the lab. She enjoyed her opportunities to be a Teaching Assistant and an Intern at the National Park Service. Most importantly, she recalls fondly that there was “a lot of interaction with the faculty and the faculty were always accessible.” Those years of hard work have paid off as she is now the Manager of Aspen GIS.

Joshua Zeeb finished his MSGISc degree in 2018 completing the program completely as an online student coming through the GIS certificate program and then the MS program. Josh spent some time after graduation with OmniTrax doing GIS data analysis before landing a highly competitive position with Aspen GIS in February 2019. Josh spoke of his time in the GIS Project Management class and Statistics class and appreciated the scripting experience he gained as a graduate student. Josh worked while attending graduate school, so the real-word examples offered in the online classroom resonated with his professional experience at that time and have carried forward to his career in Aspen.

Erin Glen worked her way through our undergraduate geography program graduating in 2017. While working in Nicaragua with Matthew, she learned the value of GIS in working with natural hazards. She knew then that more education in GIS would be important, so she started the GIS certificate program and is currently an active student in our online MSGISc program. She is the newest Aspen GIS employee having started in January 2020. Lessons learned in Research Methods and Geographic Information Analysis classes have already been valuable in her new work in Aspen.

Check out the City of Aspen GIS public portal at https://mapaspen-cityofaspen.opendata.arcgis.com/ where our DU Geography alumni have made over 50 layers of spatial data available to the public. And behind the scenes there are hundreds of data layers available to the City of Aspen staff that make use of GIS in their daily tasks ranging the gamut from the Parks Department to Public Works. Erin pushes the use of the 3D model of the community and expands the use of new aerial photography and LiDAR data. Josh is hard at work building out mobile apps for use in asset management. Strategic planning that began 30 years ago to bring GIS to the City of Aspen continues today as our DU Geography alumni Bridgette, Josh, and Erin carry on the tradition with annual strategic planning to set the course for expanded use of GIS to benefit the employees and citizens of Aspen. 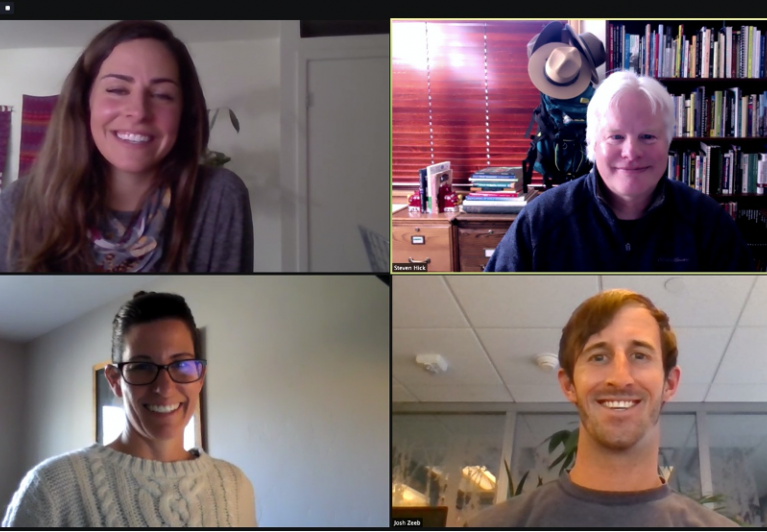 William (Bill) Howard (BA Geography 1958, PhD 1960), 88, Cal Poly Professor Emeritus passed away on August 29th, 2020 surrounded by family and friends at his home in San Luis Obispo. Bill was a witty, intellectually inquisitive, funny man who was never short on jokes and observations in his characteristically curmudgeonly outlook of the world. He was also a caring father, husband, grandfather and educator who genuinely relished the opportunity to broaden the horizons of university students throughout his entire career. Upon graduating from high school in his hometown of Pink Hill, North Carolina, Bill joined the Air Force and served his country stateside during the Korean War. After serving 4 years in the military Bill went on to graduate from the University of Denver with a bachelor’s degree in history and philosophy and a master’s degree in Geography, prior to receiving his PhD from the University of Edinburgh, Scotland in Geography and Urban Planning.

After returning to the United States from Scotland he followed his calling in life, which was to be an educator. He started his teaching career during his graduate studies at the University of Denver and the University of Edinburgh, and continued rising in academic ranks with positions at the University of Denver, the University of Colorado Denver, Virginia Polytechnic Institute and State University, and lastly California Polytechnic State University, San Luis Obispo, where he was hired to be the first permanent full-time Head of the City and Regional Planning Department in 1980. Bill strongly believed that both educators and students should be actively involved in their chosen profession. To that end he was continuously engaged in local and national planning issues through consulting with private and public planning agencies and serving on various advisory boards.  Bill used his endless energy to enrich students’ planning education and preparedness for the “real world” by finding ways in which they can work with communities and assist them in their planning efforts. To the end Bill was passionate about city planning and helping communities become more holistic in their thinking about the ways that they could be better for the people living within them. He used his sabbatical from Cal Poly to do just that for the City of East Palo Alto, CA serving as the Community Development Director for two years. His post retirement years were dedicated to seeking innovative ideas and projects addressing housing issues. Bill  was a ferocious reader and at any given time could have two or three books going at the same time. Ironically, he was fond of Mark Twain’s timeless expression … “I have never let schooling interfere with my education.”

Bill is survived by his loving and devoted wife Zeljka, his children Wade Howard (Brenda) of Newbury Park, CA and Lori Howard (Josh) of Westminster, CO, his stepchildren Amy Bilbija (Jeff) of Cambria, CA and Dushan Bilbija (Robin) of Novato, CA, his grandson Connor, and his step granddaughters Katherine, Ella, Jelena, and Ana, two sisters Bette Smith (Albert) of Emerald Isle, NC, and Nancy Gladson of Kinston, NC, and a brother Cecil Howard (Ruth) of Panama Beach, FL. He will forever be in our hearts for the laughter, love and joy that he brought to our lives as well as all the students who went on to touch the world with the ideas that they learned from Bill Howard.

A celebration of life will be held at a future time, when the world regains some sense of normalcy. In honor of Bill’s legacy, a scholarship in his name has been established at Cal Poly. This scholarship supports graduate students in the Master of City and Regional Planning program at California Polytechnic State University, San Luis Obispo. Contributions can be made by online (bit.ly/HowardScholarship) or by sending a check to: City and Regional Planning, 1 Grand Avenue, San Luis Obispo, CA 93407-0283. If sending a check, please reference the “William Howard Scholarship” in the memo line.