If you were around campus on weekends this spring, you may have noticed the buzz of a drone flying 200 feet overhead. Geography Professor Steven Hick and IT Senior Specialist William Boesch spent weekends this spring flying a drone over the DU campus to capture high-resolution aerial photography for use by the Campus Facilities department and in class projects.

Boesch has been responsible for campus mapping for 20 years, having built a campus geographic information system (GIS) and spatial database for his capstone project when earning his master’s degree in Geography from the University of Denver in 2002. Since then, the university has relied on aerial photography collected through a partnership managed by the Denver Regional Council of Governments (DRCOG) every other year. That photography comes with a price—and the spatial resolution on the ground is approximately six inches—meaning that items smaller than that really don’t show up in the images. That's where Hick and Boesch come in. Hick has been flying Unmanned Aerial Systems (UAS) or drones for about six years; first learning on fixed-wing aircraft and then flying multirotor aircraft. Drones can fly low, and with good cameras, can collect imagery with tremendous resolution. For this project, given the size of campus and the volume of data, Hick decided to fly at approximately 200 feet above ground level to collect one-inch resolution photography. Only twice did the pilot have to fly higher than 200 feet. The Williams Tower located west of the Magness Arena stands at 192 feet and to ensure clearing the spire, the drone was programmed to fly 20 feet higher. After two aborted missions over the Daniel Felix Ritchie School of Engineering and Computer Science, Hick decided to fly at 300 feet. According to Hick, “The odds of two aborted missions near the same building led me to think that some of the equipment housed in the building could provide enough radio interference to interrupt the connection between drone and pilot. Adding a hundred feet of altitude avoided radio interference and the loss of image resolution was nominal.”

It took approximately six weeks to complete nearly 20 flight missions. All flights were conducted early on Saturdays or Sundays when pedestrian traffic on campus was minimal. The opposite was true for the Ritchie Athletic complex, where there tends to be more traffic on weekends with athletic events, camps, and graduation ceremonies. For those reasons that data was captured early on a Wednesday. In all, over 120 acres were captured, and flight missions ranged from six to 13 acres at a time. “I didn’t want each flight to get too large to assure that we maintained visibility of the drone at all times which is a requirement. It was important to calculate where we could launch and still maintain visibility without taller buildings getting in the way,” Hick said.

Over 2000 individual aerial photographs were collected and stitched together into a single mosaic image that has been shared online and will be used by Facilities Management personnel. They now have a high-resolution, clear image of campus.

Interested in seeing the results? You can view them at this GIS map viewer. 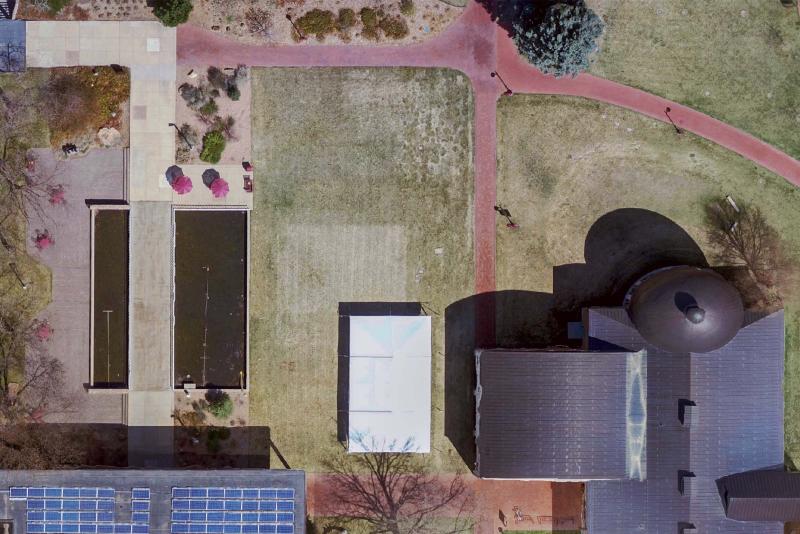